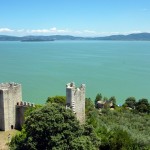 Once you exit from Cornieto farm and reached the main road, turn right direction Monteleone d’Orvieto and reach Città della Pieve. From here follow the signs Moiano – Castiglione del Lago. The road is straight and flat after a 30-minute drive will get you to Castiglione del Lago, situated on a limestone promontory joined to the mainland by a flood plain. The area, first Etruscan and then Roman, saw the destruction of the town by Henry IV in 1091, the same was rebuilt in 1221 and still retains the medieval wall. Suggestive climb and walk the so-called “wall-walk”. 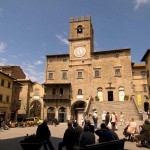 Broken down towards Arezzo, after a few kilometers you get to Cortona, reaching out to the top of a fertile mountainous spine, between Val di Chiana and Val Tiberina. Of ancient origins, Cortona touched the zenith of its glory in the Etruscan period between the fifth and fourth centuries BC suffered while in the fifth century AD, the invasion of the Goths . In 1200 established himself as a free municipality imposing his lordship (Casali) in the surrounding areas. To see: the Palazzo comunale (1241) in Piazza della Repubblica (the heart of the city) and Palazzo Pretorio (1200), Casali’s residence. At the height of the hill are erected two large complexes: the Sanctuary of Santa Margherita and the Medici fortress. One last look should be given to the cathedral (1400) built on the ancient Pieve di Santa Maria. On the return trip, and before the end, follow the signs for Tuoro sul Trasimeno and Passignano and subsequently to complete so around the lake. Also from the same location you can make wonderful excursions to the islands (Maggiore and Polvese) with a ferry line. To come “home”, follow instructions for Chiusi, one of the most famous Etruscan capitals and worthy of a visit, then on Città della Pieve and Monteleone d’Orvieto.