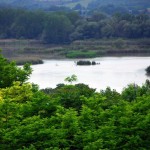 At the exit of the farmhouse Cornieto, just reached the main road, turn left to Fabro and reached the toll booth, take the A1 southbound. Then exit at Orvieto and take a left to the Basque, and then follow the signs to Alviano Scalo. In this area the river Tevere creates an infinite series of marshes and swamps, also has long since been made ​​a network of trails and observers for naturalists and for all the fans of ” bird-watching”. The oasis is a destination for school trips just for your interest in teaching and education to the environment during all periods of the year, especially in spring. Going back and passed Baschi, turn right and follow the signs to Todi. 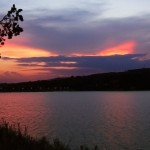 After a few kilometers you’ll see a massive dam on the river: Corbara dam, built to produce electricity. The state borders for several miles, in a gorge with limestone cliffs along the lake, the water basin below in a scene of great emotional impact. Continuing on the same road had for a few kilometers you get to Todi. The city, home of the Franciscan Jacopone, is one of the most solemn and intact medieval towns in Italy. Its ancient origins fused elements Umbrian and Etruscan. In the third century BC, the country was conquered by the Romans and after the demise of their empire and the scourge of the barbarian invasions, became a free municipality through a period of great economic prosperity. The heart of Todi is Piazza del Popolo, one of the largest medieval squares in Italy. The three major public buildings are “Palazzo dei Priori”, “Palazzo del Popolo” and “Podestà” and “Palazzo del Capitano”. The cathedral, begun in 1100, was remodeled in the course of time and is preceded by a majestic staircase. The church of San Fortunato, which began in 1292 and ended in 400, contains a fresco of “Masolino da Panicale” and the tomb in the crypt of Jacopone. Outside the fortified perimeter is “Santa Maria della Consolazione” which seems to be the work of Bramante. It’s a fundamental building of the Italian Renaissance. To return to the “home” you have to reach the town of Orvieto Scalo or, alternatively, take directions from Todi to Prodo and visit the tiny but very picturesque village of Titignano and continue until Orvieto Scalo. Here ,take the A1 motorway heading north for Fabro, then for Monteleone d’Orvieto, and then return to the farm Cornieto.