Once you leave Cornieto farm and reaching the paved road, turn right and continue for Monteleone d’Orvieto, Città della Pieve (6km), the birthplace of Perugino, the most famous Umbrian painter of the Renaissance. The town is built entirely in brick from the early Middle Ages to the Renaissance, with continuity of the school. Among the works of Perugino preserved in the city include: 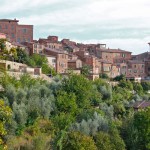 A short distance from Città della Pieve, descending towards the plains and then up towards the old village is Chiusi, one of the “Capital” of Etruscan empire.
The country holds its richness in Etruscan artifacts scattered throughout the territory or collected in the precious museum. Thriving and famous from the seventh to the fifth century BC, especially in the Etruscan king Porsena. After the visit of Chiusi, follow the signs to Cetona, delightful medieval village set on a hillside with a view of the homonymous mountain, whose summit ( Mt.1148 above sea level) opens up a picturesque scenery of the surrounding valleys and lakes of Bolsena and Trasimeno. 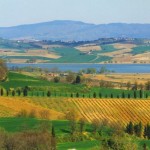 You can hop in the car almost at the top and ending walk the last 300m. The burying of Mount Cetona area has been known since ancient times for its natural caves, inhabited in the Stone , and visited by Neanderthals. The fossil record and historical evidence are gathered today in the archaeological museum of the country, next to the town hall. Although the caves are open to visitors. To return to the “home” just follow the signs for Chiusi and from there, along the road to the valley within the valley of the Chiani (ancient reclaimed swamp where it is not unusual to observe in their natural habitat, egrets and herons and various species of wading birds: storks, buzzards, falcons minor pavonelle, as well as a multitude of otters) after 18 km you reach Fabro where following the signs for Monteleone d’Orvieto, you will return the farmhouse Cornieto.