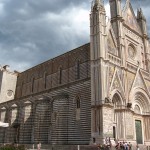 Once you leave Cornieto farm and reached the main road, turn left to Fabro and take the highway A1, Fabro, heading south, after just 15Km. It will appear in front of you a large increase in the tuff of the Paglia Valley that seems to offer a huge plate of one of the most precious art centers of Italy: Orvieto. The urban structure of the city is entirely medieval, in particular, the ‘200 – 300. The most remarkable church is the cathedral of Orvieto, built in 1290, in commemoration of the “miracle of Bolsena” or when a consecrated host from start to gush blood that stained the sacred linens. Do not miss the “Pozzo di San Patrizio ” entirely excavated in the tuff. The project was commissioned by Pope Clement VII by Antonio da San Gallo il Giovane. Important museums such as the “Faina” and “Civico” Etruscan offer remarkable value. The “Palazzo del Popolo” is the largest civil works of the Middle Ages Orvieto. 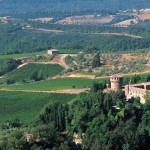 Particularly striking the district of “San Giovenale”. Going down from the city center, follow the signs for Bolsena other Etruscan and medieval village that is located on the northeastern shore of the lake. The urban structure is derived from the reconstruction of the ancient medieval Volsini razed by the barbarians who invaded after the decline of the Roman power. Around the large mirror of water of volcanic origin, there are villages of interest also striking for its spectacular views of the lake and its islands: Gradoli – Marta – Capodimonte. On the way back, once in Orvieto Scalo, rather than take the A1 heading north to reach Fabro, go to Ficulle, an ancient village known for working with clay and so-called “cocci” (pottery and amphorae for cooking are the typical products). Concluding the route with Fabro, there are only 8 Km others! To reach the farm “Cornieto” follow the directions for Monteleone d’Orvieto.